The Impact of CAM’s Clients & Their Stories

CAM serves over 70,000 people every year. The populations we serve are abundant to include those that are homeless, lower income individuals and families, active duty military and veterans, those who are elderly, children, and so many more. Often times we don’t get to see what happens to our clients after they receive services at CAM. Some come back if they need help with groceries or food, but once in a blue moon we have clients come back to thank us for the help we provided them. Or we will have case managers call us to tell us how one of our clients is progressing. We love when we’re able to experience those miracle moments.

Below we share a few of our client testimonials to showcase the miracles that occur at CAM every day. 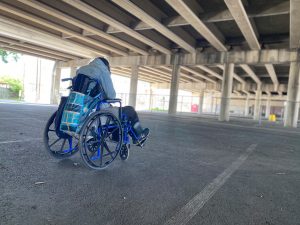 One of our sweet clients, Daniel, showed up to CAM in a wheelchair. He had been hit by a car and both ankles were broken. He had been released from the hospital to a rehab that now had put him back on the street with the idea that he should just go to a local shelter. He has never let us or asked us to help him enter a shelter, but he was begging for help now. He was very worried and scared; CAM was very scared for him too. The problem is that the existing, incredible shelters don’t have the capacity to care for someone this disabled who can’t care for themselves. On top of this, our friend Daniel also has a pretty severe mental health diagnosis. We worked with another community nonprofits to get him into a hotel but realized within a day he couldn’t stay there with no help, no way to use the restroom, shower, get food, etc. After almost 8 days of trying to advocate for Daniel, we were able to find him, by himself, under the highway, in a soiled wheel chair and take him to safety. It shouldn’t be this hard to do what is right for someone. CAM’s purpose is to remain proximate to those in need. After exhausting every potential solution, we finally just started calling in favors and sounding the alarm. It worked and Valerie Salas, CAM’s Director of Homeless Services, and another outreach worker went out into the streets and found Daniel to bring him into Haven for Hope for one night to get him cleaned up (his wheel chair and clothes were very soiled and he had to be cut out of his clothing). They gave him a sponge bath and took him to get a covid vaccine. They also agreed to help us get him into a rehab facility. CAM and Haven for Hope will share the cost of this facility all in thanks to a local donor. 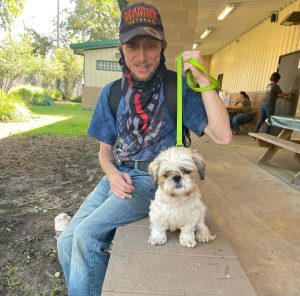 CAM was able to help a family rescue and reunite with a 13 year old run away. The young girl had been on the streets when her family approached our incredible security officer Mark Crosson. The parents showed him a picture one Saturday in January and 10 minutes later, he saw her step off the bus with one of our clients. The client had brought her to CAM to get food and to also seek help. He and a few other clients on the streets knew she shouldn’t be out there and felt safe enough to bring her to CAM to get her help. Mark was wise enough to detain her with conversation and food so she wouldn’t run off in time for the parents to arrive. We believe being here ready to help is part of our purpose. So much of this is a miracle and we see God in the work we do. 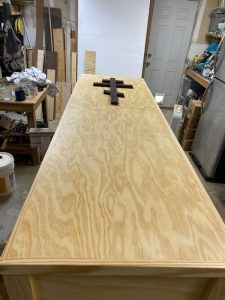 CAM, acting as an “Emergency Room” of social services doesn’t allow us the opportunity, in many cases, to know the rest of the story or even the clients whole story. We are here to say yes when someone needs help immediately and then we guide them to a long term solution or resource. We often don’t see them again. Sometimes the individual reaches out to us and sometimes it’s an advocate (a neighbor, family member or a church). Most recently a church called us after calling several other places. They had an individual who was homeless that they had a relationship with who was in the hospital and had a terminal illness. The hospital was getting ready to release him to the streets to face dying alone, without medical care, and no way to fend for himself. Shelters could not take him because he couldn’t care for himself. This is a flaw in our system. CAM took the call and said yes we will help. We began advocating for him, visited in the hospital, begged the hospital administration for more time and with the help of the church and our work, we were able to get James into an incredible nonprofit called Abode that provides a home and care for people who are dying and have no one. James was loved on by that church for 10 years, he did odd jobs and tried to contribute by giving back. He told the minister that he wonders if things would have been better for him if he had the same kind of loving family the church provided all along. The short answer is likely yes. James was buried in a casket made by an individual at the church. He spent his last month being loved on, in a warm bed and receiving loving end of life care. CAM was able to help advocate for him, help the church find this place, donate dollars to support his care at the nonprofit and we were there to celebrate his life at the funeral. At his funeral the Priest said it was important for us to be available. It struck me that this is what CAM does best…we are available.

A gentleman dressed in medical scrubs came into CAM with some items he wanted to donate. As we helped him unload the items, he started to share why he was donating to CAM. He, his wife and two children had been forced to relocate to San Antonio because of a hurricane a few years ago. They soon found themselves homeless, living out of their car and at their wits end. He had nothing and came to CAM for assistance. He said CAM helped him and his family for about two years before the storms of life lifted. During this time, he was going to school to be an EKG technician. He said it had been about a year since they needed assistance from CAM. He and his family are doing so well now that he can donate back to CAM. He was so grateful! Often times, we aren’t able to track our client’s whereabouts after they receive services from us. So, when they come back to CAM to help us instead of asking us to help them, it’s a true full circle moment for us and for the client. God continues to bless CAM over and over again. He wants CAM open and operating and He continues to give us the tools and resources needed to make a difference in the lives of so many. 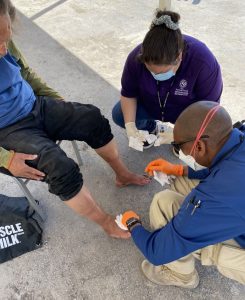 David showed up at CAM to get a sack lunch. He walked hunched over and stumbled on his feet. He had a hard time articulating himself and we knew that we had not seen him before. That’s an important component since we have staff that do work with people that live on the streets. This form of help often referred to as street outreach, strives to meet the clients where they are and it allows us to know them and notice when something seems wrong or someone seems new. We could tell that David was in physical pain and suffered from some kind of cognitive disability. Somehow after feeding him, and visiting with him we were able to learn that he had a sister that didn’t live too far from CAM. We drove over to his sister’s house and learned he had been discharged from a halfway house, struggled with a brain injury, a mental health issue, violent outbursts, and many physical problems. She could not care for him and we understood why. David is like many who fall through the cracks and for which help is very complicated. Outreach workers with CAM and other nonprofits work to care for them. In this picture CAM was able to call Adult Protective Services. They came over and began washing and working on David’s feet. We were able to give him a new pair of shoes. Our work with David is not over. We have been in touch with a mental health unit and we believe that we have found a place for him to stay and receive care. This is the kind of work that can take months and even years as we address the complicated needs of the unsheltered street homeless but we are committed to helping him.

The Mission of CAM is to share the Love of Christ by providing immediate assistance and encouragement to people in crisis. CAM is a place of Grace and all are welcome.